The tropical coastal forests of Kwa-Zulu-Natal: That lead photo of the lion in the tree has been inserted right at the back, sorry.

This is mostly a winter scene with snow above the 9,000 ft. contour,

but even in midsummer THIS may happen at 6,000 ft!

Eland in Summer. These big antelope diminish in stature against the backdrop of the 10,381 ft. Cathkin Peak on the right.

Eland is the icon animal of the Drakensberg foothills and up to 9,000 ft. elevation.

Winter eland below the snow line. Compare the body shape and colouring of the eland in the centre of the photo with the ancient rock painting below:

The eland has been South Africa's icon animal for thousands of years. San First Nation Rock Art in Drakensberg caves.

Pregnant eland cow. The whitish neck may originally have been the grey-blue of the front ends of these animals.

It also is home to the beautiful, equally lush green mamba.

And it is the historical venue where the white rhino was saved from extinction by Umfolozi Chief Ranger Dr. Ian Player, brother of the gholfing legend Gary Player.

There were twelve white rhino left in the wilds in Natal and diminishing, and no breeding effort was successful no matter which bull was secluded with which cow - because there was never such an attempt before.

Dr. Player said "we do not have enough information, not enough money for research. I am going to offer the oldest, biggest bull for hunting and use that money for research". The greenies went apoplectic but he went to the USA and auctioned that impressive trophy for $100,000. He made no bones about the reason for the hunt. A medical doctor from Texas bid quite in excess of the $100k and came to hunt the rhino with Dr. Player.

That $100,000 in those days was worth R50,000 in the very strong economy SA had until 1994, and it served its purpose well. A very capable young man on his team was appointed as project leader and in the end their finding was that a rhino cow, just like lionesses, needs TWO bulls with her, and until they fight and there is a clear winner she would not ovulate. All remaining individual white rhino bulls from around the country was brought to Umfolozi. Two cows got pregnant and today South Africa has 20,000 white rhino all over the country and supplies the whole of Africa. 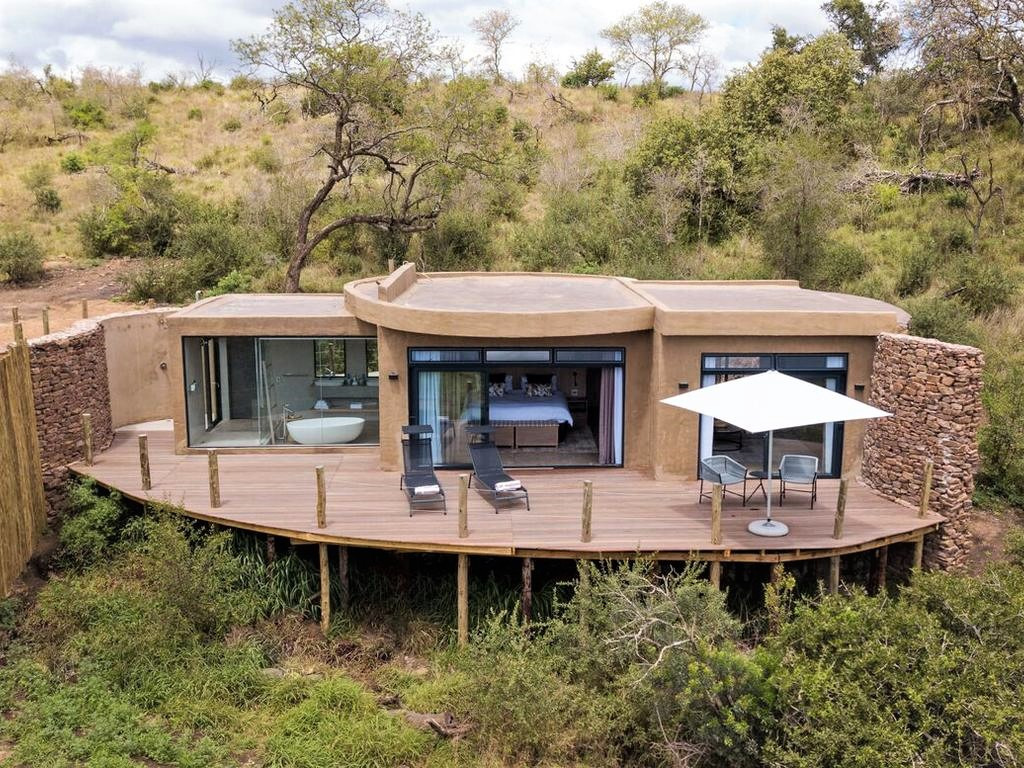 The coastal plains is home to scores of private game reserves, some very secluded and upper class and some with basic but adequate and tranquil amenities. This one is at "M'Thembu" (mother elephant).

View from the inside. (No, she is not in the bath hiding out of view - she took the photo!)

The lakes at Kosi Bay Estuary on the border of Kwazulu-Natal Province with Mozambique.

Wildlife is abundant: elephant, hippo, crocodile, bushbuck, kudu, nyala, bushpig (a proper, aggressive wild boar). Sharks enter the left hand channel in the photo and feed on the abundance of fish as the three lake systems form the perfect breeding ground for many species. Just me and my FN FAL and my backpack and my telescoping fishing rod, I explored this whole area extensively on foot about 30 years ago when there was zero civilisation - simply a few tribal families who lived from spearing fish in the shallow waters and nothing else.

On the FN FAL (in fact it was the South African R1 copy of it). What a fantastic, 100% all the time, reliable and capable rifle that is. I hiked around the right hand shore in that aerial view above for two days from a short strip where I was dropped by a small bush plane, about 8 miles to the south with arrangements to pick me up again a week later. When I reached the mouth it was almost low tide and I removed the 10 round magazine from the rifle and threw it over the water to the other side, and also the spare I carried in my back pack.

Then I took the R1 by the barrel, waded a bit into the water and threw it over. I can still remember the thud with which it landed in the sand a mere five yards away from the water's edge. Got my backpack lifted above my head and waded through and set up camp under the low pine trees to the left in the aerial photo, hiding all my stuff under pine needles. Then I disassembled the rifle and cleaned it and the magazines. A week later I shot a bushbuck female through the brain by the grass strip while I waited for the plane, gutted and rubbed her dry with pine needles. It was the 7,62x51mm R1 that set the scene for the .308W to become the far ahead leader of all big game hunting cartridges in SA.

Kosi is now a big tourist attraction - mostly local folks and not foreigners. There is no hunting allowed.

The area around Kosi has many elephant and the kayaker or road traveller will regularlty meet up with them.

Coastal scene south of the estuary

Boys building a raft (and character). The lodge / camp supplies the prepared logs: when finished floating around, the raft must be disassembled and returned to the camp manager.

At dusk bushpig (Africa wild boar) can be encountered but they are very shy of humans. This is a camera trap photo.

Hippo can be anywhere

Nights are balmy even in midwinter.

Back to that lion in the tree

Only an elephant or a couple of angry Cape buffalo cows will accomplish this!

In my experience Kwazulu Natal is the Province with the greatest variety of geography and therefore animal habitat in South Africa. I dwelled on KZN and Kosi because I have deep memories of moving moments and close encounters in that province.

Suitable Synthetics - Even Though Alien To African Eyes

Hunting Is Not A Sport